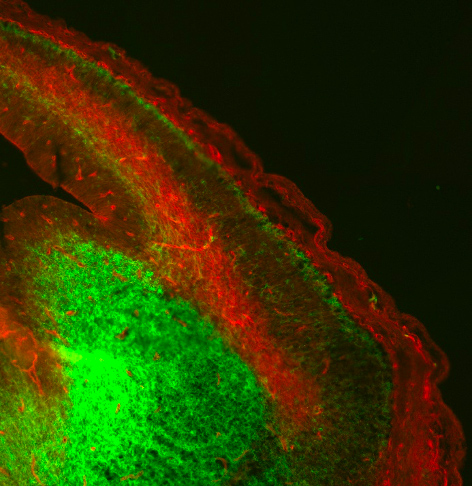 The main flows of migrating interneurons during brain development can be followed by the expression of GFP in the Dlx5/6 domain of expression while the other cells are labelled with the tomato red fluorescent protein.

Recently, it has been proposed that alterations in inhibitory circuits could be a common pathogenic mechanism in several neurological and psychiatric disorders such as epilepsy, autism spectrum disorders, schizophrenia and ID including DS. The functional balance between neuronal excitatory (glutamatergic) and inhibitory (GABAergic) systems (E/I) is established during development, and is therefore altered in these pathologies. Remarkably, DYRK1A dosage variations have been associated with most of them (epilepsy, ASD and ID) and E/I imbalance was observed with Dyrk1a dosage variations in mice. Indeed, Dyrk1a+/- mice have a decrease in GAD67 GABAergic marker, thus converging toward increased excitation; whereas Dyrk1a overexpression in a monogenic Dyrk1a model (TgDyrk1a) results in an increase in GABAergic markers and GABAergic neurons, leading to an overall inhibition of the system. Altogether, these results argue for a critical role of Dyrk1a during brain development and in the maintenance of the balance between excitatory glutamatergic neurons and inhibitory GABAergic neurons.

Our objective is to better understand the role of DYRK1A in the development and function of the different neuronal populations, with a particular attention on the GABAergic system in the context of MRD7 and DS.  Our studies go from molecular pathways to cell function and animal behaviour by combining our expertise in mouse genetics (mutant, transgenic conditional knockout mouse models) with molecular (RNAseq, proteomic and phospho-proteomic analyses), cellular (neuronal cell cultures, time-laps confocal cell imaging) and in vivo studies (general behavioural, cognitive and social behaviour tests, drug treatment, epilepsy). This global approach will help to clarify molecular and cellular dysfunction in the brains of neurodevelopmental disorders leading to cognitive deficit.