Vision and neurotransmission in ID and ASD models

Vision and neurotransmission in ID and ASD models 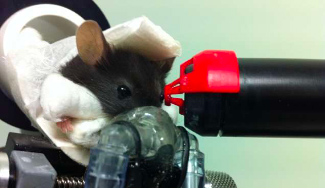 A non-invasive technique to look at the mouse retina: optical coherence tomography

Visual impairments affecting patients with intellectual disability (ID) and or autistic spectrum disorder (ASD) are given only limited attention, as they seem minor compared to other symptoms. However, functional and/or anatomical anomalies (altered contrast and/or color perception, global or layer-specific alteration of retinal thickness) are more and more frequently reported in a variety of diseases of the central nervous system (CNS), as Alzheimer, Parkinson or Down syndrome. Notably, amyloid plaques have been detected in the retinas of Alzheimer patients, in correlation with the severity of the cognitive symptoms (reviewed in Mirzaei et al., 2020) ; dopamine concentration is reduced in the retinas of Parkinson patients (Harnois et Di Paolo, 1990);  the inner retina of Down syndrome patients is abnormally thick  (Laguna et al., 2013; O’Brien et al., 2015). Of diencephalic origin, the retina is readily optically accessible in vivo, with a resolution of a few microns thanks to the development of technics as optical coherence tomography (OCT). It has a well-defined layered architecture together with a regular distribution of well-characterized  neuronal subtypes, defined by a combination of molecular markers, morphology and functional responses to natural stimuli (Masland, 2001, 2012; Vlasits et al., 2019). These are as many advantages to unravel the neuronal perturbations induced by genetic anomalies linked to DI and/or ASD. Through the use of various animal models (mice or rats) of these diseases, we are aiming at characterizing these perturbations, identifying the underlying molecular mechanisms and measuring the efficacy of potential treatments. Besides a better understanding of retinal physiopathology, our approach should give us some insight in the malfunctioning of central structures. Due to their tight developmental link with the retina, we are more specifically focusing on diencephalic nuclei, as the habenula and the paraventricular hypothalamic nucleus, which involvement in Down syndrome symptoms has not been studied yet, despite their roles in decision making and control of food intake.

This project uses a variety of techniques, from in vivo imaging (fundus, optical coherence tomography) to molecular tools as RNAsed, as well as immunohistology and electrophysiology (patch-clamp, multi-electrode array) on both retina and brain.